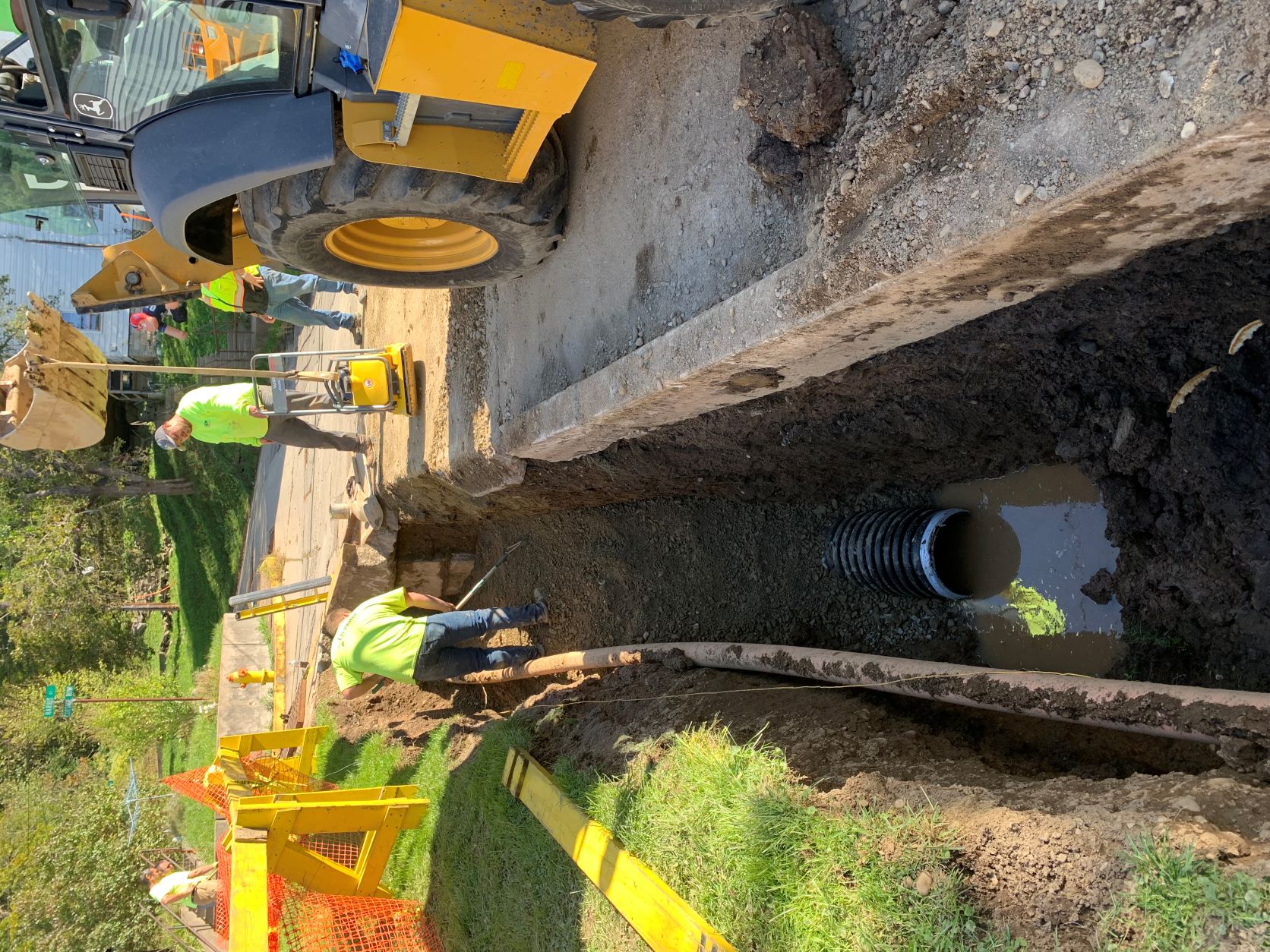 The Bradford Sanitary Authority has made significant progress this year with assessment and repairs to both the sanitary and the storm water system. The Sanitary Authority cleaned, evaluated, assessed, and documented several sanitary and storm lines this year, along with several major projects while handling day to day operations and maintenance. Over 53,000 feet of sewer and storm lines have been assessed and documented throughout the sanitary and storm system in 2021. These assessments assist the authority in determining the overall health and state of the system as well as forecasting capital projects in the coming years.

On King Street, the authority, with the help of the Department of Public Works, replaced 180 feet of 15-inch storm main. The failing stormwater infrastructure was creating a significant safety concern on the surface with damaged sidewalks, curbs and driveway approaches. The authority requested feedback from the citizens that live on King Street and one citizen stated “Bradford should be proud to have people like this working to maintain our underground public works”, he went on to say “Just want to say, Job Well Done”!

Behind North Bennett Street and Calvin Count, the Authority redefined 330 feet of open ditch line, lining it with large rip-rap and installing 2 new catch basins. This eliminated water run off onto North Bennett and Abbott Streets and into yards and properties of area citizens. One citizen stated that her yard was “constantly inundated with muddy water, rocks and leaf debris over the years after a rainstorm.” After the authority completed this project, she also stated, “I held my breath over the first rain after they finished this extensive endeavor, and, to my relief, no muddy deluge!”

The authority is continuing to pinpoint projects and improvements that need to be performed in the city, but these projects and improvements are not possible without the continued funding and support toward the sanitary and stormwater system. If customers are interested in finding out ways that they can save money on their stormwater bill and give back to their community through the “adopt and inlet” program, please contact our offices at 28 Kennedy St. or access our website at https://www.bradfordsanitary.com. 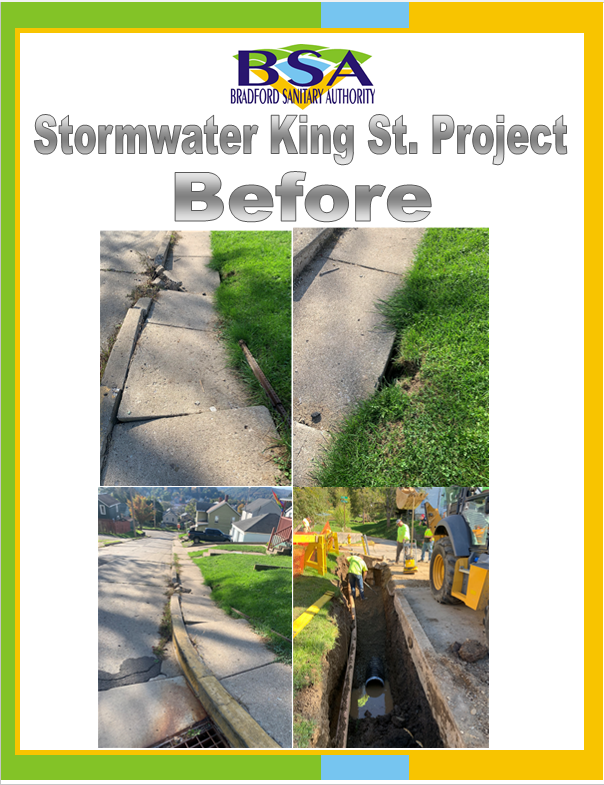 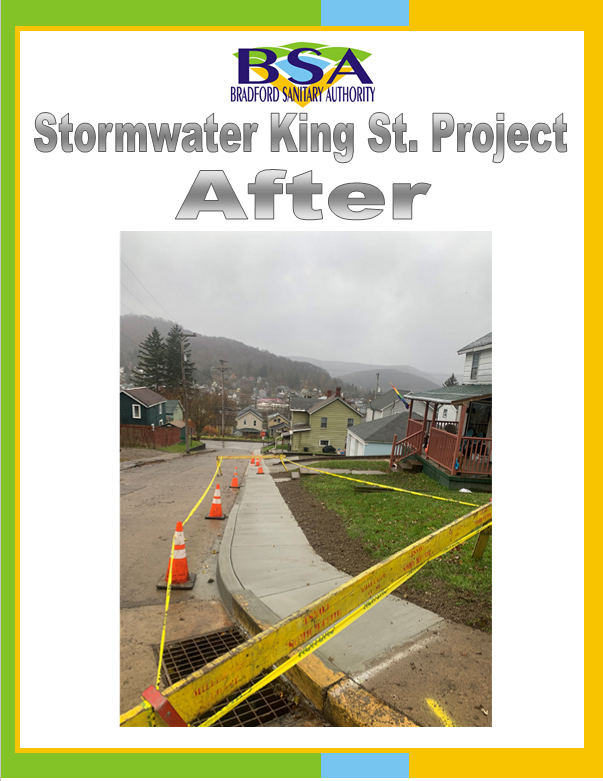 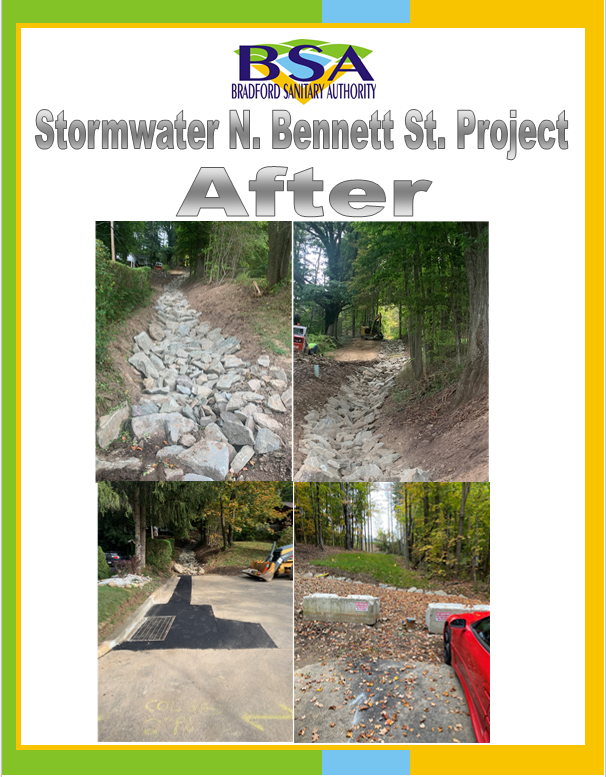 BSA Plant Foreman Graduates From Leadership M...
Please join us in congratulating our plant foreman Mr. Matthew Mongillo for being a 2022...
Updated May 19, 2022 - 8:53am
Employees Take Pride in Workmanship
Our employees take pride in their workmanship by keeping up with preventive maintenance...
Updated May 18, 2022 - 3:21pm
Safety Improvements for BSA Staff
Bradford Sanitary Authority installed catwalks across our final clarifier tanks that will...
Updated May 13, 2022 - 11:12am
END_OF_DOCUMENT_TOKEN_TO_BE_REPLACED

How is water used in your home? On average, 17% goes towards showering, 27% is used by the toilet, your faucet drains 15%, your clothes washer another 22%, miscellaneous needs take up 5%, and those...
learn more